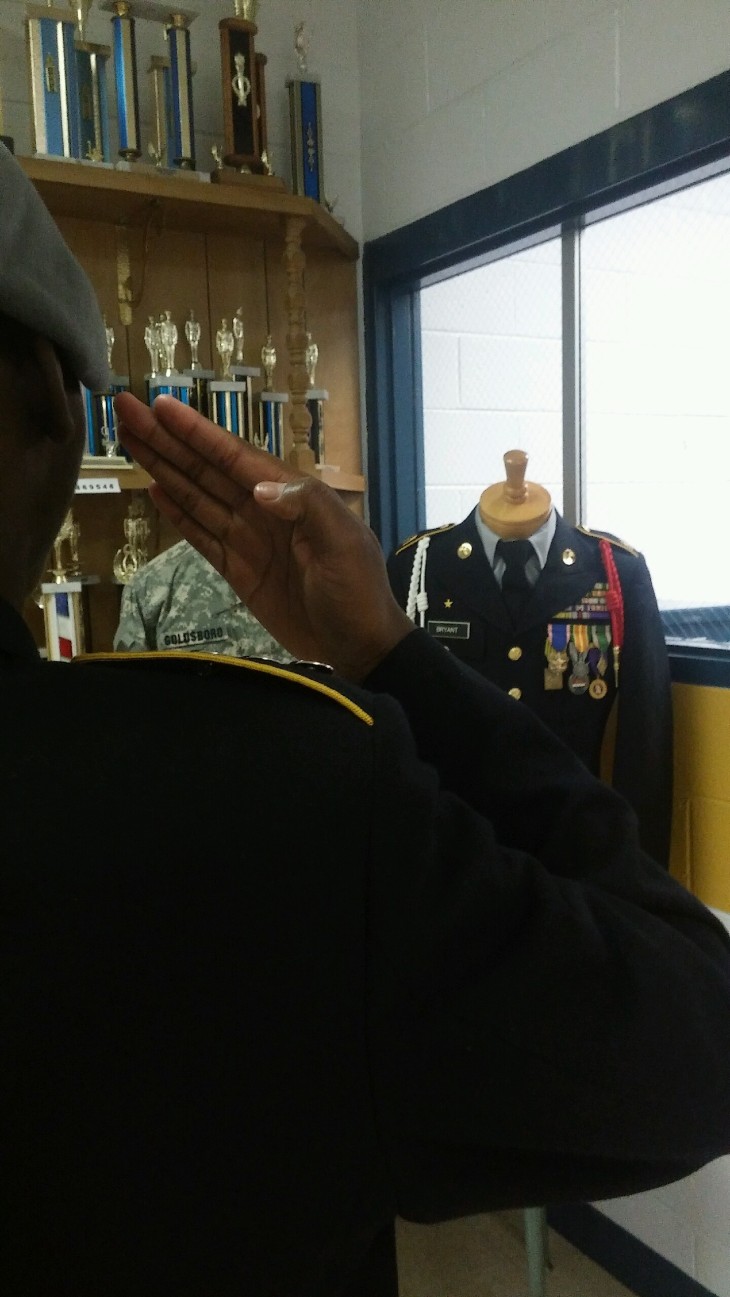 Desconte Bryant would have been a senior at Goldsboro High School this year. He would have worn his dress blues and competed in Drill Team competitions. He would have performed a moment of silence during the morning announcements. He would have done all those things if he hadn’t been gunned down last Memorial Day.

When we close our eyes, we can still see him — his perfectly pressed, deep blue ROTC uniform; the way he held his rifle or saluted at attention; how light bounced off the medals pinned to his chest. We can see the person who would help any and everybody that seemed to be struggling. That’s just who he was.

But when Aprile Hatch thinks about her son, she sees bullet holes on the back of that same military jacket and a blood-stained front porch. She hears gunshots, screams, a ventilator, and his final breath.

So we won’t. His life was more than how it ended. These words are how his life should be remembered.

We write them big because to us, Desconte was larger than life. And to those of us he left behind the night he was shot to death on his front porch, he still is.

Aprile’s earliest memories of her son are of a “big baby” — a “good boy” who was “mature” and “clingy.”

But the GHS student body will remember him for his commitment to the JROTC program.

“He doesn’t like sports. I could not get him to play a sport for anything. So I said, ‘Honey, you need to do something. I don’t care if you get on the debate team, the chess team. I don’t care what you do, but you need to do something,’” Aprile told the Pride. “When he got his schedule, JROTC was in there. He asked me, ‘What is that?’ So I told him what it was and he said, ‘That’s fine,’ because he wanted to go into the military. He wanted to be in the Marine Corps. I told him, ‘JROTC is the place to start.’”

But he wasn’t always the confident leader we saw walking up and down the halls or the kid who could do things with his rifle that most people couldn’t even imagine. In the beginning, Aprile said, JROTC scared him.

Being the best cadet became an obsession.

“We worked on that creed. Oh my god, we worked on that creed. I can just see it. We’d be in the house and I would scream across the room, ‘Desconte, what does the cadet creed say?’ When he got in class, he was the first one to remember it. There was no stopping him after that,” Aprile told the Pride. “It was the Drill Team, the Rifle Team, the Saber Team, the Color Guard. He’s come a long way. He really has. And I’m really, really proud of him.”

And life in the program made him a better human being, brother, son, and friend.

“He was very, very mature. He was always helping his brother with his homework. He’d help me cook. At a very young age, I had to teach my children how to stay home by themselves because it was just us,” Aprile said.  “He was the mature one in the house. He held everything down. You couldn’t even get him to leave the house unless he was coming to school or stayin’ after school to do something with JROTC.”

So although it’s tragic, it’s almost fitting that the night he died, he had dedicated every moment of the day until the shooting to his passion.

“He went to the parade earlier that day — the Memorial Day parade. I was at work and he called me probably about 9:15 that night. He told me he was at the Dillard Alumni building. He was going to work there for them. I said, ‘OK. That’s fine,’” Aprile said.

So when she got off work after midnight and he still wasn’t home, she wasn’t worried. He would be there soon, she thought.

And then, the unthinkable happened.

“Me and my youngest son were in the kitchen eating. All of a sudden, we heard gunshots. It was off in the distance so we didn’t really pay it no mind. It was probably about six seconds later, we heard gunshots at my front door — just tearing up my house,” Aprile said. “Bullets were tearing up my windows, flying through the walls. Me and my youngest son, of course, we duck and cover. After the gunshots stopped, we could hear ‘em going up the street. You could hear two different guns going off.”

For the next few moments, they sat there in shock.

“We were still in shock and we just happened to hear somebody on my front porch. They were moaning. You could tell they was bleeding because you could hear gurgling. They was gasping for air,” Aprile told the Pride. “So I told my youngest son to go get my phone so I could dial 911. I told them they need to come to my apartment — that my apartment’s been shot up and I don’t know what happened, but somebody on my porch was hurt.”

She had no idea that the real shock was waiting for her on the front porch.

She didn’t know what to do.

“Finally, I just stepped outside. I couldn’t do nothing but get on my hands and knees and touch him and tell him to breathe and focus. He looked like he was trying to fight with every breath to survive,” Aprile said. “He would pass out and I would shake him real hard. I’d tell him, ‘Wake up.’ He was fighting. He was. I’m just out there screaming, ‘Where is the ambulance.’”

Desconte had gunshot wounds on his back and head.

“It was just amazing that he didn’t die right then and there,” Aprile said.

Her son had always been a fighter, but what happened next still renders her speechless — and makes her emotional.

“He was trying to get up. The EMT had to tell him to be still,” Aprile told the Pride. “As the EMTs were taking him out, he saluted one of his best friends — the one who brought him home that night. I just couldn’t believe that. I wouldn’t believe it now if I hadn’t seen it.”

Desconte died that morning at 10:34. It was Memorial Day. April finds irony in the timing.

“He was looking to die in the military,” she said. “Not on his front porch.”

She gets by the best she can, but she sees his face every day. She misses the young man who loved to cook — the kid who “held it down” at home while she worked. And she leans on the people who loved him so much, his classmates, for support as what would have been her son’s senior year unfolds. 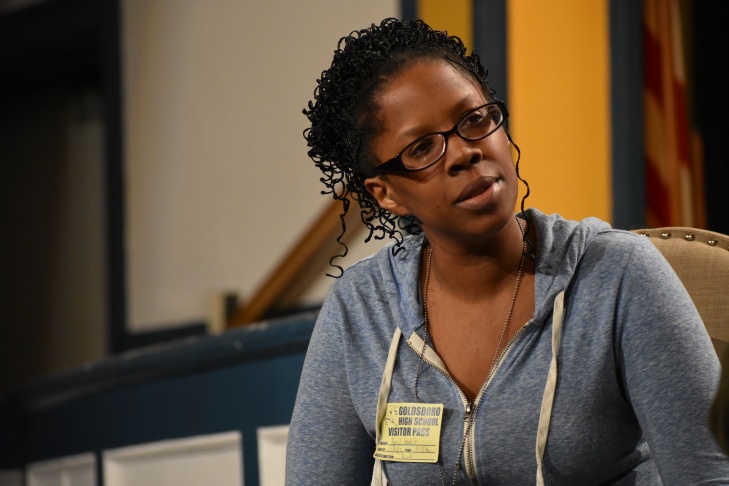 “My son has a lot of supporters. There’s respect and love. If it wasn’t for these kids, I would be broken. They are everything to me. So, I’m still a proud mama. These kids, they are my lifeline. They are my link to Desconte,” Aprile said. “But it’s not easy. The hardest thing was making the decision to cut off his ventilator. Who wants to lose their child at the hand of someone else. You never think in your wildest dreams that you’re going to lose your child like that. It’s still a shocker to me now. It’s hard for me to believe. I want to tell myself every day that he’s over there at (a friend’s) house. He’s not gone. That’s what I want to tell myself. But as a realist, I know he’s gone. And it hurts. It hurts every single day.”

Aprile isn’t the only one hurting. Desconte’s story is something that will never be forgotten and will continue to be told by all the people that love him truly and dearly. And even though his life was cut short, there are goals that he has set forth for all of the lives that he has impacted while he was with us.

So his classmates are on a mission this year to make sure Desconte is never forgotten. So is his ROTC instructor Col. Inman.

“Desconte was the most disciplined and focused cadet that we had in the program. He was just a natural leader. We really respect what he did for the program and what he meant to the school,” he told the Pride. “He was always there.”

So when he heard about Desconte’s death, it was “the worst day of my life,” he said.

“He was a great kid,” he said. “As far as Drill, Rifles, and Color Guard, he was the most amazing classmate I’ve known in my life. I was upset most of all because I found out that a fellow comrade had died. It was a hard thing to find out. But you have to realize that he is gone but he is not forgotten.”

His classmate, Tawana Richardson, was not only close to him, she and her older sister, Christina, were part of his family.

And because she and her sister were so close to the family, his death hit them hard — and still does.

“My heart just gave up on me and it was crazy,” Tawana told the Pride. “At first, I thought, ‘He’s too strong for this. He will make it. It was a little shot he will be fine.’ But the next day when we went to the hospital, things were more intense. When I got the news that he was gone, I couldn’t hold back anymore. I started to cry.”

So when the JROTC put Desconte’s uniform on display inside its building and made dog tags for the students with his name on them, it gave her some peace.

“Everyday I walk by his uniform. I give him a hug or a kiss and let him know that I don’t forget about him. I wear him around my neck everyday,” Tawana said.

And when, tonight, city leaders, law enforcement, family, and friends come together at Desconte’s house to honor his memory — and to vow to bring his shooter to justice — she, like so many other GHS students who loved our friend, will be there.

“I make sure that I don’t forget about him,” Tawana told the Pride. “Something like that is unforgettable.”

There was an error retrieving images from Instagram. An attempt will be remade in a few minutes.